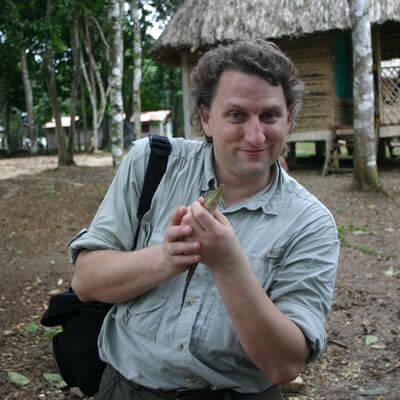 Thomas R. Holtz Jr. is principal lecturer in vertebrate paleontology at the Department of Geology, University of Maryland, College Park. His research focuses on the origin, evolution, adaptations and behavior of carnivorous dinosaurs, and especially of tyrannosauroids (Tyrannosaurus rex and its kin). He received his bachelor's degree in Earth and planetary geology at Johns Hopkins University in 1987 and his Ph.D. from the Department of Geology & Geophysics at Yale University in 1992.

Holtz is also a research associate of the Department of Paleobiology of the Smithsonian Institution National Museum of Natural History and serves on the Scientific Council of Maryland Academy of Science, which operates the Maryland Science Center in Baltimore, Maryland.

In addition to his dinosaur research, Holtz has been active in scientific outreach. He has been a consultant on museum exhibits around the world and on numerous documentaries. He is the author of the award-winning "Dinosaurs: The Most Complete, Up-To-Date Encyclopedia for Dinosaur Lovers of All Ages." He was co-editor of the 2014 2nd Edition of "The Complete Dinosaur" and is in the midst of co-editing the 3rd edition.

In 2019, he received the Provost’s Excellence Award for Professional Track Faculty in Teaching.