When Hope Goodman was considering where to attend college four years ago, she was enticed by the opportunity to be in the inaugural class of Justice and Legal Thought (JLT) Scholars at the University of Maryland.

“The opportunity to take part in a brand-new program and provide constructive feedback for the classes that follow was incredibly enticing,” Goodman says, “because I knew that I could get involved on campus in a meaningful way immediately.”

That desire to make a difference, combined with her ambition, has since set Goodman apart as a leader on the University of Maryland campus and in College Park Scholars. This month, she will be walking the stage as part of the first graduating class of JLT Scholars.

Developing as a leader

In high school, Goodman was broadly interested in the law and social justice issues. She was immediately drawn to College Park Scholars’ newest program because of the subject material, as well as the faculty she met at orientation.

“Meeting [JLT Director] Dr. Robert Koulish and [Associate Director] Erica Smith at orientation was fantastic,” she says. “Their enthusiasm for the program and the experience that they could provide to us students around issues of law and social justice could not be ignored or overlooked,” Goodman says.

Students benefited from the faculty experience from day one, with the first class in the JLT curriculum being taught by a respected professor from the University of Maryland Francis King Carey School of Law. Though Goodman reportedly found the transition from a “very straightforward” high school environment to this kind of rigor challenging, she adapted quickly.

Smith would agree. As associate director of the program, she has gotten the opportunity to build close relationships with JLT Scholars. She says Goodman is “unquestionably” one of the best students the program has ever had.

“From early on, Hope exhibited great maturity, intellect and drive,” Smith says. “A role model for her peers, Hope has exemplified academic excellence, contributed to the University of Maryland community in meaningful ways, and demonstrated how she values the contributions of diversity to her learning.”

Smith says it’s clear to see Goodman’s development as a campus leader, especially when you look at her resume. In her time on campus, Goodman has earned ODK’s Top 10 Freshmen Award, the College Park Scholars Tri-Star Award and the Kirwan Award for junior leaders. She was recently selected as a member of the Maryland Medallion Society, which recognizes the achievements of the top 20 graduating students. She was also chosen to be the graduation speaker for the Department of Criminology and Criminal Justice.

Following graduation, Goodman will be headed to law school at the University of California Berkeley School of Law. She plans to pursue a career as a public interest attorney in the criminal justice system.

Goodman acknowledges that if it weren’t for her experience and studies with JLT, she would not be pursuing this career path. She had initially entered University of Maryland anticipating a career in neuroscience.

Instead, Goodman is graduating with two bachelor’s degrees, one in criminology and criminal justice and a second in psychology. Her criminal justice courses focused on understanding various aspects of the justice system--including policing, court proceedings and corrections. As a psychology major, she studied each subfield of psychology, as well as the skills needed to practice within those subfields. Goodman says the JLT Scholars program complemented those majors, reinforcing the knowledge she was gaining from her studies.

“My JLT courses on philosophy, social justice and theory taught me the historical and modern context of the criminal justice system. They also helped me to understand the influence psychology has on our social relationships, and thus the development of social justice issues and legal challenges,” Goodman says. “My education from my majors would not have been nearly as colorful and complex if I had not taken JLT courses in complement.” 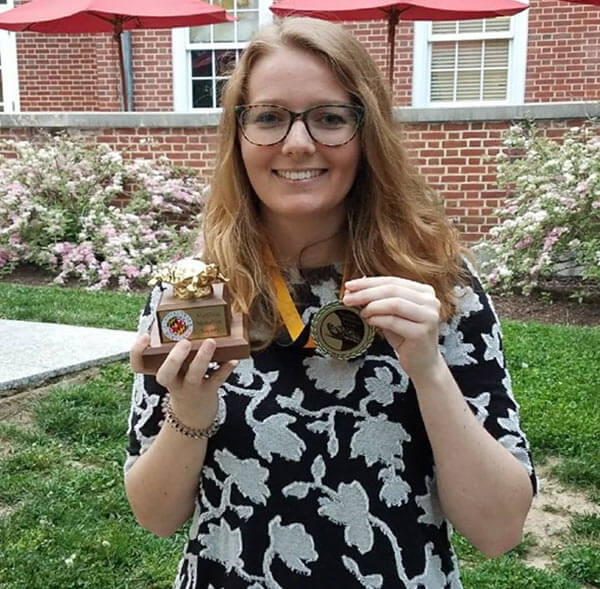 In preparation for her future, Goodman has been interning for the past year as an investigator at the Maryland Office of the Public Defender. This has affirmed her interest in law and social justice. She also devoted much of her undergraduate career to combating human trafficking. Now the JLT alum wants to explore the possibility of becoming a victim’s rights attorney, particularly for human trafficking and sexual assault survivors, during law school. Already she has an idea of where she wants to get involved once on the Berkeley campus this fall.

“Berkeley Law has a student-led service organization devoted to assisting human trafficking survivors in the Bay Area with their legal needs,” Goodman says, “so I most definitely intend to get involved with that once I arrive on the Berkeley campus.”

Smith concludes: “Her accomplishments are nothing short of amazing, but it is her humility, energy and personality that are most inspiring. Hope is a remarkable young woman with a bright future in front of her.”

Katie Bemb is a journalism major and an alumna of the Public Leadership Scholars program. She has worked in the College Park Scholars communications office since early 2016. Katie is apparently not a fan of free time, given that she seeks out new internships, jobs and campus programs each semester. Upon graduation, she hopes to use her communication skills to enact social change through domestic policy and global human rights development.